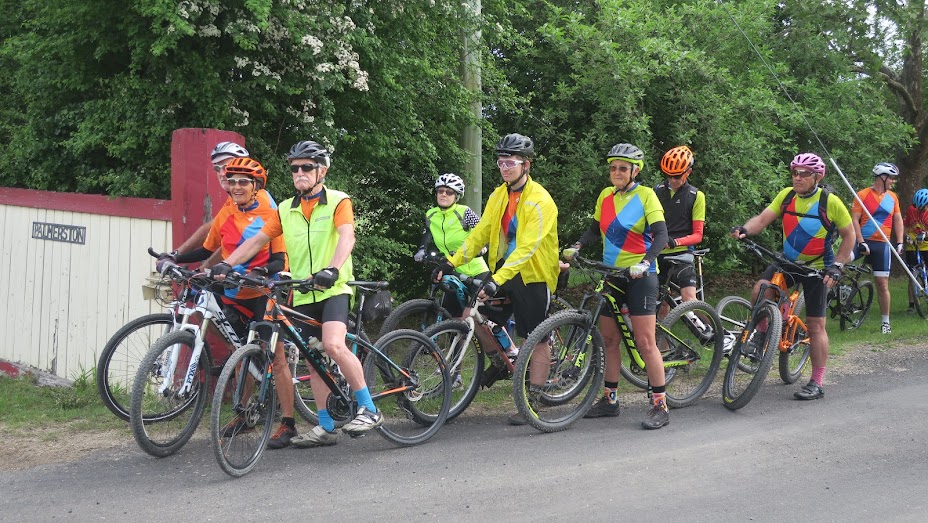 Last weekend was a smorgasbord of cycling opportunities for DUBBUG members with the both the Coffs Coast Cycle Challenge and Armidale’s Tour De North West held on the same day. For many, it was a tough decision to make a choice, as both are for worthy causes. Some of us elected to head up to Armidale, staying overnight. Sunday morning was cool, yet dry and was actually perfect for cycling out from Peterson’s winery on our mountain bikes. The quiet, country, mixture of sealed & unsealed roads had a few hill & cattle grid challenges and to minimise bunching, we were released in groups of 6 or so. Unlike the Coffs Coast Challenge, the Tour De North West is untimed. However an amazing lunch is served from 12:30 pm so really no timing is necessary, as everyone cycles hard to be back so as to not miss out on the special event festivities.
This is the fourth year of Tour de North West and each year is just as much fun. The whole event is supported by SES volunteers who do a great job.  A special shout out to Jocelyn from Roberts & Morrows who, along with Simon, have made this cycling event even possible.

There are options for a variety of ride lengths with multiple morning teas & our group took them up! Rayner led the way on the 91 km trek, whereas E.D. & Liam took the shorter route to morning tea. Piggy, Erica & Gary cycled extra & found solace in heading for warmer clothing. Don & Michele escorted Christian (or was it the other way around) on his impressive malvern star, through the long course. Phil just loved the cycling, though we did miss our mate Mark.
The main morning tea at Blue Hole was amusing. A woman supporter (not cycling) used the 2-3m long drop toilet, crying out “Oh no, I’ve dropped my phone”. She then proceeded to tell us she could see it and even ventured to say that if she was lowered down by someone else she might be able to grab it. At that point it was too much for us to think about and we left her to her fate. We later learned she successfully retrieved the phone – no details on how she did this or its current state. I don’t want to know.
Lunch under the trees at Peterson’s winery is very special. The food was divine, even more so because they especially catered for those with intolerances. There were sponsored drinks along with a blues and jazz trio playing music as the sun came out and the day warmed. It was hard to leave, some of our party being the last to do so!
Photos can be accessed by clicking here