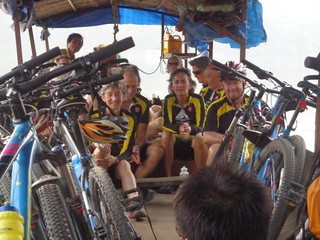 Today’s ride involved three climbs, crossing a succession of river valleys.  The tour guide (Le Kien) decided we would stay on the village road, rather than take mountain tracks. After a big breakfast in Bac Me, we start from the top of the first pass.  ED manages to challenge Kein up the hills, even after taking the photos of the DUBBUG climbing the next hill from the rear. 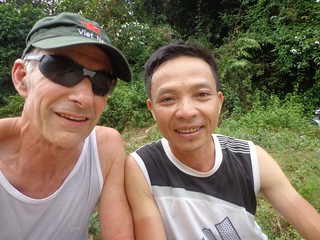 Coming downhill, towards Yen Hoa, Alan comes off his bike and requires to be taken to the local hospital and then transported back to Hanoi.  We were most fortunate to have Kirk as “tail end Charlie”.  With his medical training, he quickly stabilised Alan and then stayed by his side, including returning to Hanoi.

We had lunch and the remaining DUBBUG continued to the village of Dan Dong, where we transferred into traditional long boats for a relaxing 1.5-hr ride along the beautiful Nang River and cross the lake into the stunning Ba Be National Park. The park is centered on the country’s largest natural lake which is surrounded by limestone cliffs, waterfalls, caves and abundant of wildlife (though we did not see much wildlife). Dinner and accommodation was in a traditional house of Tay minority.